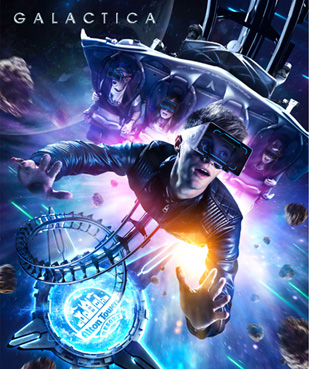 Virtual Reality
(02/06/2016)
Alton Towers Theme Park (UK) virtual reality rollercoaster. Galactica is the world’s first rollercoaster fully dedicated to virtual reality.
Unexpected Accolades
(3/11/2015)
by Bernard De Koven
"I was so struck by the depth and breadth of the PlayArt site that I had to bookmark it for fear I might get lost in the sheer abundance of images, quotes and essays. It is clearly a resource that we could all be mining for years in our ever-deepening journeys on our playful paths." Click here for more.
PlayArt: Newspaper Article in the East Hampton Press
by Kelly Ann Smith
(1/21/2015)

PlayArt does exist in the Emirates, and my concept for an immensely large PlayArt Museum generated great enthusiasm and interest. After the Louvre and the Guggenheim Museum projects were launched in Abu Dhabi, apparently, the third art museum was supposed to be a PlayArt Museum. I, therefore, took an exploratory trip to Abu Dhabi and Dubai. My two agents are exceptionally articulate and they have connections that really reach to the very top. However, my trip was somewhat disturbing and gave me considerable pause.

As a tourist, it is possible to be fantastically entertained. The two cities boast an accumulation of mega projects that may be without competition. But participating in any of these high-risk ventures from a business perspective is an entirely different matter.

The Abu Dhabi Guggenheim may serve as a horrifying example of the manner in which these projects proceed. The contract was signed in 2006 with a completion date of 2011. This date was pushed back, first to 2013, then to 2015 and 2017. The NY Times reported on 5/19/2014: "The Guggenheim is still just a building-size hole, with a skeleton crew of workers pumping out water."


The list of deplorable conditions amongst migrant workers, abuse, lack of payment, labor unrest, human rights violations, censorship, treatment of women, etc. is endless. Suffice it to say that 130 international artists called for a boycott in 2011. International contractors are continuously leaving the area because of such conditions, and this is not the place to get into more details. Unfortunately, my trip was an eye opener and made it quite obvious, that I do not want to become embroiled in this intolerable scenario.
It needs to be said that one of the founding team members, Lanier Graham, former curator at the Museum of Modern Art, New York produced an extensive presentation for this trip. He particularly researched the cultural history of the Emirates and laid the groundwork for the next step forward. The presentation was professionally printed and bound.

However, the leadership of the Emirates could not produce any evidence that the financial mismanagement, the dismal labor conditions, the unrest, demonstrations and exit of major construction industries would or could be brought under control. Consequently, neither Lanier’s nor my presentation changed hands. The situation was simply too alarming and uninviting.