Brian Sutton-Smith
Essays
Choose Essay:
For humans, play is a refuge from ordinary life, a sanctuary of the mind, where one is exempt from life’s customs, methods, and decrees.
- Diane Ackerman
In the true man there is a child concealed who wants to play.
- Friedrich Nietzsche
It is a happy talent to know how to play.
Ralph Waldo Emerson
Duchamp and Calder
By Ernst Lurker
When Duchamp described the positive mental effects of his Bicycle Wheel, he did not elaborate on the subject, but he implied in essence the existence of two different frames of mind. While observing the rotating wheel, he felt connected to the playful mindset that lifted him out of the concerns of "material life of every day." This mindset is generally contrasted with the survival mindset, which is dominated by exactly those mundane, material concerns. They are the burdensome weights that diminish the human spirit.

Play is frequently associated with certain activities such as playing chess. But, the fact is, it does not matter what you do with your hands and feet. It is your attitude that makes the difference between the two opposing mindsets. I suggest that the chess player who gets upset about the game has lost the play spirit and reverted to the survival mode. The two mindsets are respectively connected to the survival instinct or the play instinct. The survival needs (food, shelter, safety, procreation) are our basic motivating forces and tend to have priority. Only when these needs are met is there room for play. But only when we are in the play mode is life enjoyable. Everything that makes life worthwhile is connected to play. Play is the source of creativity and the foundation of all of culture. These observations make it clear that the play spirit is superior to the more basic survival mechanisms. As Duchamp was transported into the mindset of play by simply watching the wheel turning, he "liked the idea" and he "used it all the time." Such a dancing wheel is, in fact, an enjoyable experience, and for the fun of it, we like to spin a moveable wheel. It is amusing and cheers us up. The purposeless motion takes us away from the duties, worries, and struggles of ordinary life. In addition, leaving these burdens behind gives us a sense of freedom. These are a few of the many emotional benefits at the basis of the play experience, and countless books have been written about them.

Duchamp’s Bicycle Wheel was a singular innovative achievement, and his written statement is critical for our understanding of his creation. But he subsequently did not pursue this type of creativity directed towards a communication of play. He produced other kinds of works and later channeled his energy into his serious interest in chess, which is simply another form of play.

For Duchamp, the playful mindset that the wheel generated was an accidental discovery, for Calder, it was the core of his artistic expression. To convey the joys of whimsy and humor, to let the spectator participate in his happy world of play was his mission. He started with humble, toy-like, mostly figurative constructions and later moved into his large-scale mobiles and stabiles. But he stayed with the same playful approach for his entire career and created an impressive body of work. Holland Cotter, a New York Times art critic, writes: "Is art basically glorified child’s play, extending into adulthood, through a lifetime, picking up ideas and gaining finesse as it goes? That’s one way to think of Alexander Calder." The other perspective, which must not be forgotten, is the fact that Calder created an aesthetic revolution. He concerned himself mostly with fun and play, and during his time, these subjects were very much taboo in the art world. They are only partially accepted today. However, Calder was an irresistible force. He produced 16,000 works, an average of one per day for fifty years. With such a prolific output, he prevailed against the strict, conventional minds and became the paragon of the playful artist.

Calder was at play virtually all the time. He enjoyed the quirky movements of wire twists and loops, the random motion of intricate, mechanical connections, and with his indomitable sense of humor, he searched for amusing possibilities in whatever caught his eye. The following pictures illustrate Calder’s nature very well. 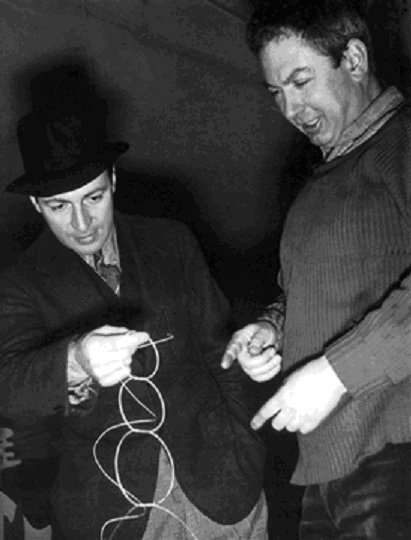 The first photo shows Calder with his New York art dealer, Pierre Matisse. They were not looking at a recognizable work of art, but they were amused and fascinated by the unexpected behavior of some wire configuration. These were some of the things that became the raw material for Calder’s playful creations, and simply fiddling with the wires could put both of them into a playful mindset. They were enjoying the exploration. 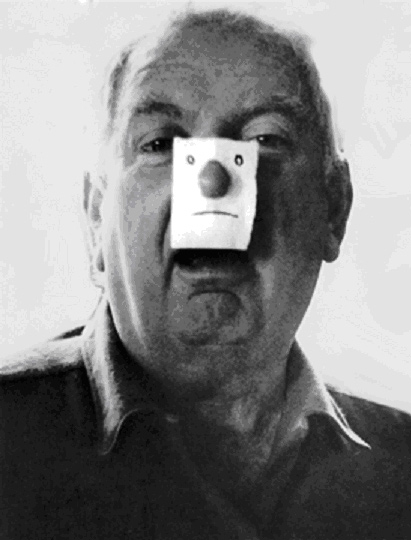 Calder wearing a nose mask, a perfect illustration of his exuberance and his indomitable, childlike humor. The slightest pretext and any kind of material could set him off to play. What’s more, he was an outgoing personality and always looked for ways to spontaneously amuse everybody around him. Two artists Calder most admired were Miró and Klee. Although they generally produced two-dimensional work, which was not interactive, Miró and Klee were possibly the most playful artists in those days. Calder relates: "I once intended making a bird that would open its beak, spread its wings and squeak if you turned a crank, but I didn’t because I was slow on the uptake and I found that Klee had done it earlier with his Twittering Machine and probably better than I could." 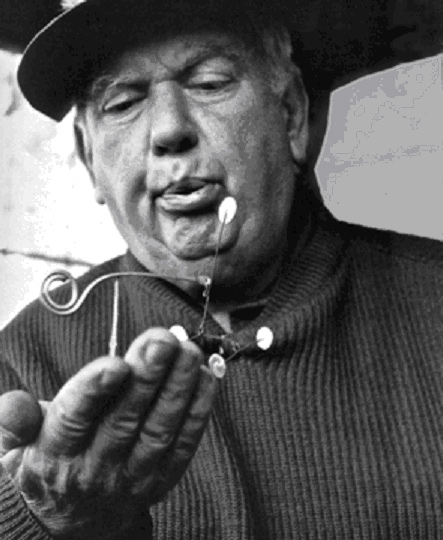 All of Calder’s mobiles, of which he made hundreds, started out as small, handheld play objects that could be set in motion by blowing on them. The photo shows Calder enjoying such a moment. There were many people who did not recognize these whimsical mechanisms as art. (When your reference point is a human statue, what can you expect?) This did not deter him and he said: "I call them objects, that way no one can come along and say, these aren’t sculptures, it washes my hands of having to define them."

Only later did architects and corporations commission these pieces in large scale. Calder enjoyed these commissions but he did not own the heavy equipment for this task, so they were fabricated in factories. The large sculptures were more easily recognized as art (as if size would have anything to do with it). Calder still had not invented a name for these large structures. He could no longer call them objects, so he asked Duchamp for help. This was an historic moment, the two pioneers and giants of the new playful art world met to solve this problem. Duchamp suggested the term "Mobile," and it became the accepted name. It is certainly a clever and pleasing word invention. In fact, the name helped to make Calder’s playful creations more "respectable," however, - and this is ironic - it also veiled the main subject of his communication. Even when these sculptures are huge and the spectator can no longer move them – the wind has to take over – they function very much the same way as the Bicycle Wheel. They pull the spectator out of the survival mode and give him a glimpse of the happy world of play. As Calder said: "Above all, I feel art should be happy and not lugubrious."