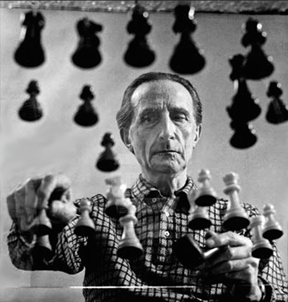 Marcel Duchamp is a prime example of such instances where the separation between art and play becomes indistinguishable. To begin with, our language is not exactly logical. We have play in the realm of music; we use the term play in a theatrical and cinematic context, but not in "artwork" or other creative activities, even though the domain of art (versus life or work) is very much the same. As a novice, you might be able to play with paints and even get some decent results, try that with a piano and your neighbors will surely complain. Our linguistic separation seems arbitrary and cannot be considered to be absolute in any sense.

Duchamp made a very strong effort to combine art and chess and suggested that his activity of playing chess be considered a component of his artistic output. He maintained: "I have come to the conclusion that while all artists are not chess players, all chess players are artists." It is said that in 1923 Duchamp moved back to Paris where he abandoned his career as an artist in favor of playing chess for 45 years, the rest of his life. This may be an extreme view of his affairs, however, he himself writes that painting interested him less and less "I play day and night and nothing interests me more than to find the right move." In 1927 his bride, Lydie, glued all his chess pieces to the board because he spent his honeymoon week studying chess. They were divorced three months later.

Art historians did have to deal with Duchamp's eccentric approach. Bradley Bailey writes: "Duchamp's identity as a chess player is so thoroughly interfused with his work as an artist that the two activities are aesthetically and conceptually inseparable." There is no question that in his life and in his art play was virtually the dominant force. Calvin Tomkins writes: "Marcel Duchamp was the playful magus of modern art, the inveterate gamester who turned old truths inside out and made us rethink what art was, or could be."

The complex story of Duchamp's excursions into the realm of chess is only one aspect of his capricious personality. He is also the most prominent member of Dada (1916 to 1922), a radical, cultural movement that was primarily anti-war, anti-establishment, and anti-art. But interestingly, Dada lauded play as the most cherished human activity. This thinking was based on Nietzsche's admonition to live with play as the highest priority. Richard Huelsenbeck, a cofounder of Dada, writes: "Dadaists are anti-masses because mass culture destroys the play instinct and creativity." Unfortunately, historians and critics are often victims of our culture as well. While they always point out the playful elements of Dadaism – wordplay, humor, the child, the trickster, games of chance and chess – they generally shy away from actually naming them playful as such.

This rebellious environment of the Dada movement was fertile ground for Duchamp's revolutionary and shocking creations. His most notorious escapade was his "Fountain", an ordinary, commercially produced urinal that he submitted to an exhibition by the Society of Independent Artists in New York. The embarrassed committee decided not to show the work. The press regarded it as an unmentionable object and referred to it as a "bathroom appliance." This practical joke became one of the most influential art works of the 20th century and launched an artistic revolution. Duchamp coined the term "readymade" for this type of creation. By simply choosing an ordinary object and signing it, it becomes art by the artist's decision.

The year of this historical exhibition was 1917. The first of these readymades was Duchamp's Bicycle Wheel that he made in Paris in 1913. At that time he had not yet developed the concept of the readymade. He simply assembled it for his own enjoyment. It is quite possible that he did not regard it as a work of art. Later he wrote: "In 1913 I had the happy idea to fasten a bicycle wheel to a kitchen stool and watch it turn." Standing in front of this silly construction, it begs to be spun. It is actually an urge we all have to set a free wheel or disk in motion, be it a pinwheel or any other round mechanical device. And what is this spontaneous initiative? It is a joyful act of play. Even watching the turning wheel is fun, an enjoyable display that puts a smile on your face. Duchamp writes: "To set the wheel tuning was very soothing, very comforting, a sort of opening of avenues on other things than material life of every day. I liked the idea of having a bicycle wheel in my studio." With these words he voices exactly the fundamental difference between the play mode and the mode of ordinary life. In play we are removed from the mundane burdens, struggles and worries that the workday can present to us. And it is the play mode that is the source of creativity and art. It is wonderful that Duchamp found this simple contraption to facilitate such a shift in consciousness and to access the cornucopia of unencumbered enjoyment and thought. He writes further: "Obviously, the wheel must have had a great influence on my mind, because I used it almost all the time from then on." So he actually confirms the beneficial effects of the wheel, a shift in the paradigm of the mind. He cannot be blamed for avoiding the word "play". It is a difficult and charged expression even today. PlayArt is intended to eliminate some of that cultural baggage.