Brian Sutton-Smith
Essays
Choose Essay:
Play, you see, can be more difficult than work,
and no easy task for an adult.
-- George Sheehan
Play and a playful mindset create joy and enthusiasm,
without which all arts and sciences would be empty.
-- Kunihiko Kasahara
If we have given up our ability to play,
we will have lost the cutting edge of our creativity.
-- Peter London
Difficult Communication
By Ernst Lurker

Lygia Clark may have expected too much from her audience when she started to create her hinged metal objects in 1960. Collectively, she named an entire series Bichos (Creatures). Not only did she want the spectators to touch and manipulate these sculptures, but she also declared that they were not the actual subject of her communication. It was the experience created by the spectators that represented the work of art. This experience was also meant to be observed with an open mind in order to discover the meaning of these activities. For the art world this constituted a totally new paradigm and a very tall order.

While her sculptures invited playful interaction, her audience was mired in the traditional approach of simply standing in front of the artwork and passively looking at it. On their own, the spectators created the customary distance that Clark wanted to abolish. They diverted the intentions of the artist in a rather unyielding manner.

Guy Brett, a London-based art critic, wrote: "Clark herself fought a constant battle for people to be able to continue to handle and play with the sculptures after they had passed into public and private collections. They were never intended to be merely looked at." (Art in America, 1994)

Alessandra Clark, Lygia’s granddaughter, relates: "On many occasions, Lygia had problems during her openings when she asked people to play with her works, but collectors started picking up the works that they had purchased because they didn't want people to touch them."

It is clear that Clark collided head-on with the deeply engrained norms and values of the establishment. It is also clear that this same establishment is guilty of violating and perverting the intrinsic values in art, and in particular Clark’s own principles. Even after she declared that the object is no longer important, the collectors didn’t care. Against her will, they absconded with the sculptures to protect them from the dirty fingers of the unwelcome "participants." They took Clark’s tool for communication and made it into a valuable commodity. They supplanted the values and principles of art – creativity, communication, self-expression and cultural contribution – with the alien system of material worth and speculative commerce. In short, money superseded culture.

These are exactly the objectionable developments that the group of conceptual artists rebelled against at the same time. (See Leo Castelli, Obstacle No. 2) On both fronts, the tangible art object that could be misused became a questionable entity. The conceptual artists created only documentations of ideas (or concepts). Clark won the battle against the investor set by creating playful events without valuable objects. 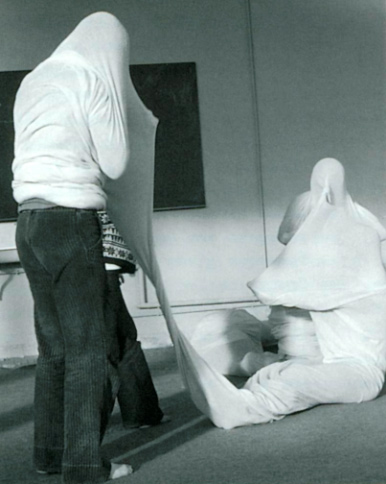 More than most PlayArt artists, Clark emphasized the meaning of the interaction. She was more interested in the emotional experience than in the physical manipulation. She equated the play experience with a Zen-like enlightenment that would take the audience out of the survival mode. When simple manual activities did not involve the participants to the extent she had envisioned, she thought of ways to include the entire body to make the experiences more fully encompassing. So she started to wrap people in fabrics and plastics and she created experiences that were emotionally totally absorbing.

Excerpts of an interview with Vera Pedrosa (Morning Post, Rio de Janeiro, 1968) reveal Lygia Clark’s own view of her work:

LC: At present, the focus of my work is primarily the experience. I propose that the spectator should discover the meaning of his activity. Basically, the object as such is no longer important, it is the experience, the sensations the object provides; it is the act that matters.

VP: Working with these objects, who provides the meaning?

LC: The spectator does. My propositions provide different experiences to different viewers. At the same time, they can search their own set of experiences for instances that are similar to those of others.

VP: Do you think communication in art has acquired a new dimension in our days?

LC: Since I started to work as an artist there were some fundamental changes in this field. Material things are not eternal but impermanent. That is the reality. In my work, if the viewer is not open to the activity or the experience, the work does not exist.


In 1960 Clark herself writes: "What is most funny is the following: I don’t take so much pleasure in playing with the Creatures; my pleasure is that of watching others play with them." She herself routinely had play experiences by simply creating her sculptures and she wanted to share these experiences; more importantly, she wanted to recreate the resulting alterations in the viewer’s state of mind. The sad fact is, in most cases, the audience did not cooperate and get engaged very well.

For Clark, it was of the utmost importance to make a contribution to humanity and to be helpful to her fellow humans. Eventually she even abandoned her body events. As Guy Brett noted: "After 1975, Lygia Clark moved into the private sphere of psychotherapy, where the context changed from one of play and experiment to one of healing."

This extraordinary step gives us an indication as to what her intentions were all along. In her PlayArt she emphasized the experience, and she insisted on getting in touch with the meaning and the feeling of the experience. The fact is that the play experience has some true transformative qualities which generally have a powerful effect on a person’s quality of life. Duchamp gave the art world an inkling when he described his elevating experience of spinning his Bicycle Wheel. However, his writing was not understood and ignored. Even 50 years later, when Lygia Clark made the serious effort to move in the same direction, her message was again not appreciated. When you watch the video clip on this site you will notice that both of the curators do not mention Lygia’s primary concerns, the experience and the emotions; and this is not a matter of editing.

Stuart Brown, the founder of the National Institute for Play, characterized such a state of affairs as follows: "If we leave the emotion of play out of the science, it’s like throwing a dinner party and serving pictures of food. The guests can understand all they care to about how the food looks and hear descriptions of how the food tastes, but until they put actual food in their mouths they won’t really appreciate what the meal is all about." Duchamp, Clark, and all the other PlayArt artists have certainly moved into advanced areas of communication, and it is quite puzzling that the art world and the public tend to be cultural reactionaries in this respect. The phenomenon seems to be reminiscent of the misunderstood Impressionists who were not accepted by the Salon de Paris in 1863 and for about 30 years thereafter.

Clark started creating her PlayArt with Bichos (Creatures) in 1960 at the age of forty. Wikipedia informs us: "Clark's later works were interactive pieces which made it difficult for museum curators to properly display them in their institutions. Consequently, her works from the late 1960s onward have not been seen in art exhibitions." There are a few exceptions, however, they are all under glass and cannot be touched, and consequently there is no play experience. Clark was, and still is, a victim of the inability of art museums to adapt to the progress in art. The tenacious adherence to the principle of the invaluable art object – as wrongheaded as it may be – turns out to be an invincible obstacle to progress. Duchamp attempted to turn the distorted value structure upside down with his infamous Fountain, a lowly, worthless, mass-produced urinal. It was an insurmountable blow to the financial interests in the art world, yet he did not succeed in changing the deplorable situation. Neither did the conceptual artists. Art museums and galleries are still on the leash of the money machine.